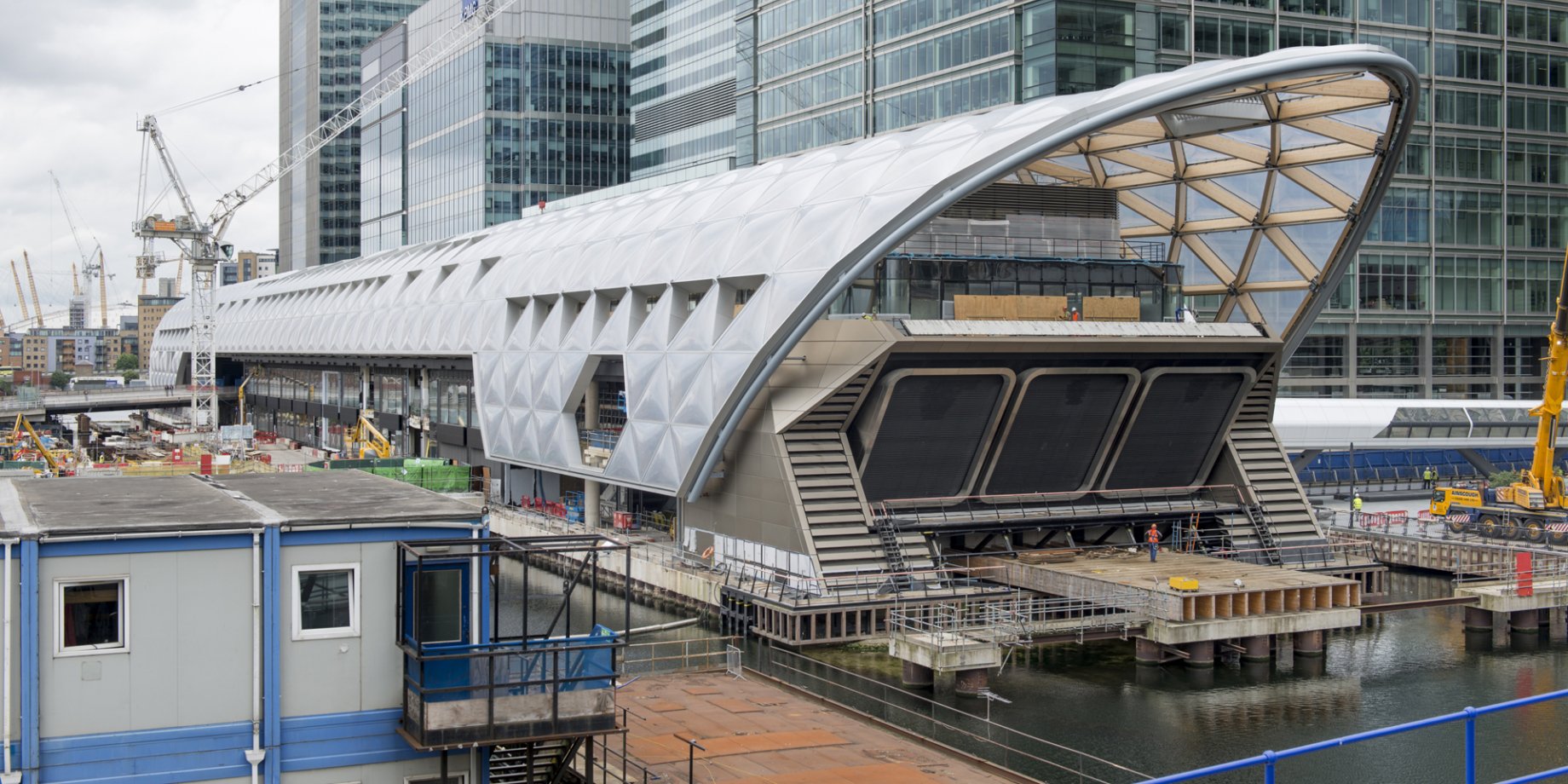 High-precision steel for an architectural gem

Canary Wharf Crossrail Station is a beautiful new silhouette in London. Designed by architects Foster + Partners, it’s 315 metres long and six storeys high and it’s been likened to a ship moored in the dock. The graceful curved roof, made of 1,414 timber beams and 564 steel joints, is a technical masterpiece.

Canary Wharf Station is one of nine new stations being built for London’s new east-west railway line (see ‘Crossrail: a new chapter in London’s transport network’). It’s located in the North Dock water area, opposite West India Quay tramway station and near the well-known tube station of the same name. Foster + Partners has designed a four-storey underground station box with a two-storey above water development that displays a restaurant, a community facility and a large landscaped park on the top floor. The station is crowned by a 315-metre curved semi open-air timber lattice roof, creating an elegant silhouette and allowing views out over the dock, Canary Wharf and beyond.

Selecting the most elegant solution

The design and build contract for the roof was granted to the Austrian association of Wiehag GmbH (experts in custom-made timber constructions) and Seele Austria GmbH (membrane cover structure specialists). “I think our solution came closest to what the architects had in mind,” says Daniel Nieberle, Project Manager for Wiehag. “Foster + Partners wanted the timber latticework to be as slim as possible and the whole roof to look uncomplicated and graceful. We developed a smart solution with a latticework made up of only straight timber beams with membrane cushions between them. We had numerous consultations with Seele Austria to optimize the proposal, making sure we could meet the very strict tolerances imposed by the design. We also demonstrated that, by using simple, straight beams, we would make a clearer, smoother and more elegant shape than if we had used curved and turned timber beams. That was the architects’ deciding factor in granting us the commission.” 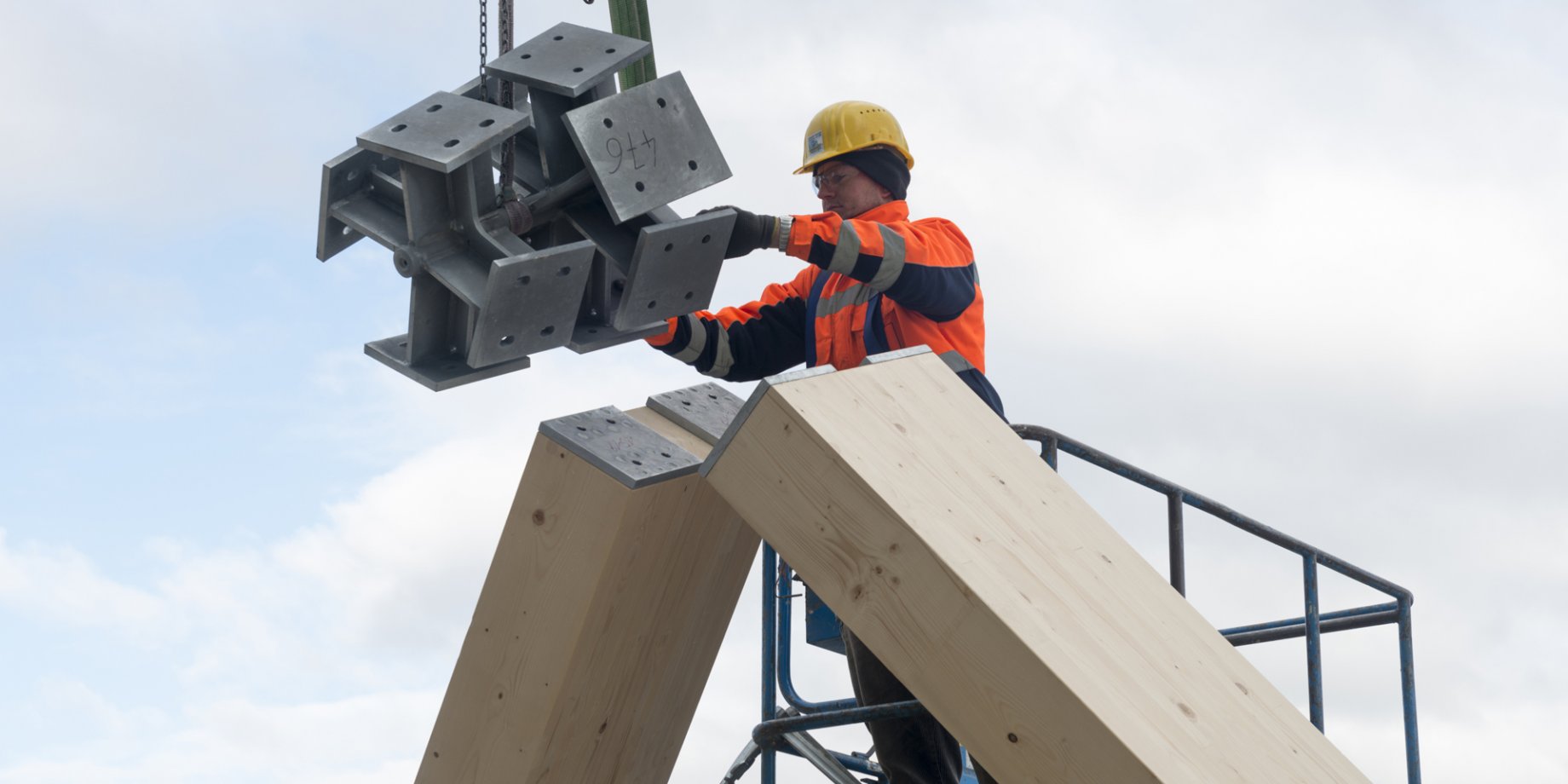 One consequence of using straight beams, however, was the need to make irregular-shaped steel joints for the roof to curve. “In a way, we were shunting the difficulties onto the steel manufacturer,” says Nieberle. “We needed 564 steel joints, most of them connecting no less than six slanted joining timber beams. We also needed two long 3D-curved steel edge profiles and additional profiles for a number of roof openings. Tolerances were extremely tight; no more than 1.5 millimetres. So we had to find a very reliable partner for the job, a steel manufacturer with proven expertise in such complex matters, and one with the capability to produce this large volume of custom-made work in a timeframe of eight months. We were very happy to come across TCS and learn about their tremendous high-precision work for projects such as the U2 360° stage and the London Stratford DLR Station.”

During the project, consultations among the involved parties were very intense. “We spent hours and hours on videoconferencing with TCS and Foster + Partners to engineer every single detail,” confirms Daniel Nieberle. “The architects insisted on discussing the size and location of each and every rivet and hole as well as the exact dimensions of every single curve, wanting to hide from the naked eye any constructive element that could deface the roof’s elegance. During the videoconferences, we shared and annotated CAD drawings. TCS’s structural and welding engineers thoroughly verified our designs – sometimes by means of finite element models – and suggested several detail modifications. 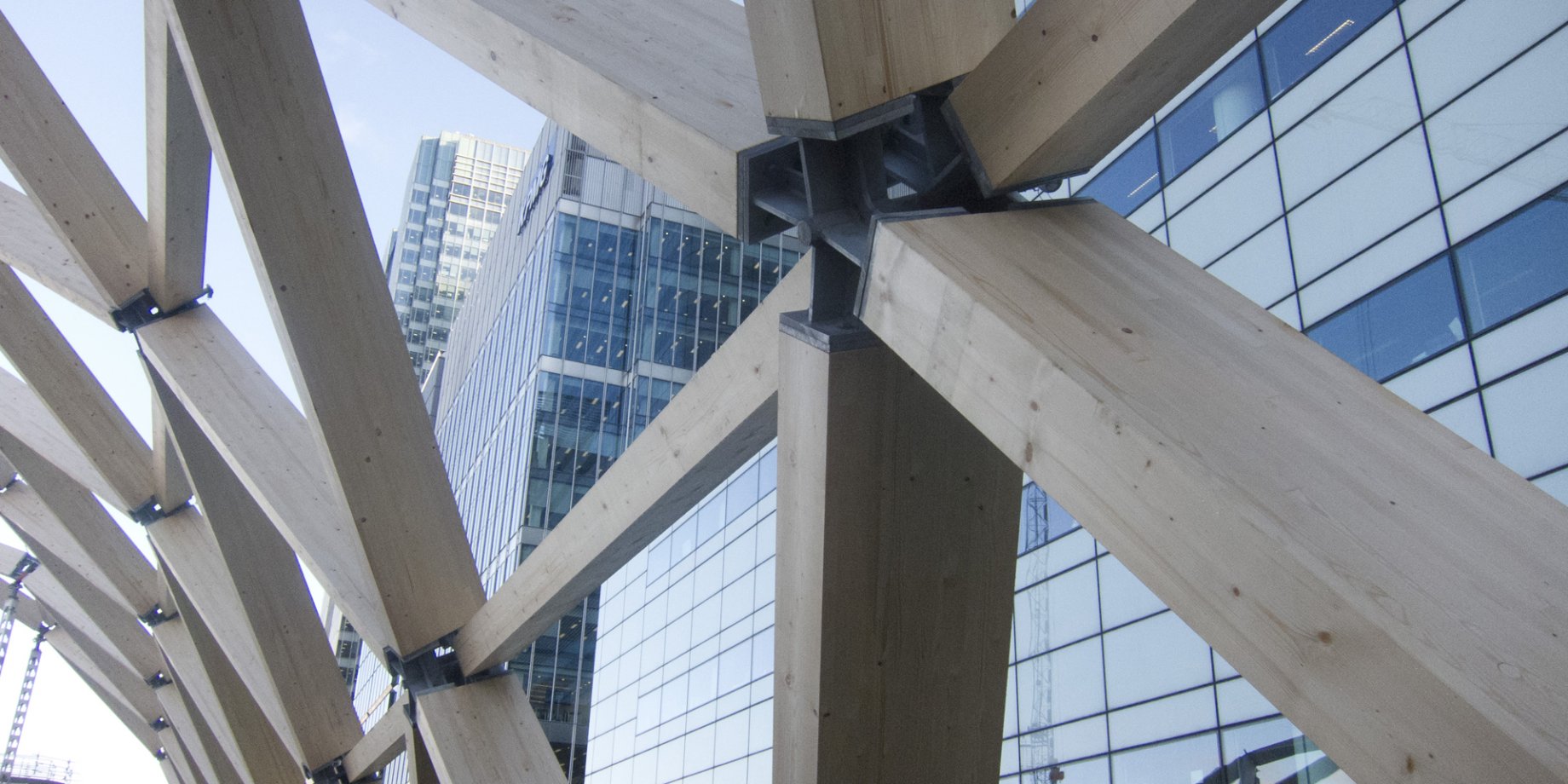 Everything fitted together perfectly

The engineering consultations resulted in no less than 300 different steel joint geometries, all of them shaped oddly. “TCS manufactured every one of the joints with utter precision,” concludes Nieberle. “The same precision was observed for making the 3D edge beams. And today I can testify that their work was impeccable. In March, we finished assembling the roof and we didn’t exceed a single tolerance. Membrane cushion supplier Seele Austria confirmed that too: everything fitted together perfectly. That was quite amazing, I must say.”

Crossrail is among the most significant infrastructure projects ever undertaken in the UK and the largest project in Europe today. It’s a new 100-kilometre railway line linking Maidenhead and Heathrow Airport in the west of London to Shenfield and Abbey Wood in the east. The central section is the most difficult to construct but also the most spectacular, as it goes under central London via 21 kilometres of new twin-bore tunnels. Also in the central section, nine new landmark Crossrail Stations are being constructed, Canary Wharf being one of the largest.

Crossrail will increase train transport capacity in London by 10%. Trains will be able to carry 1,500 people, almost double that of current underground trains. 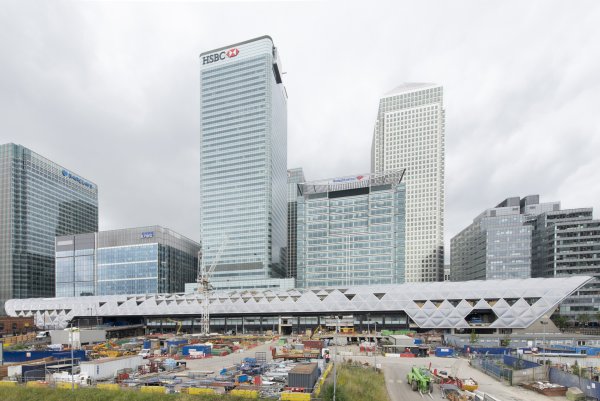 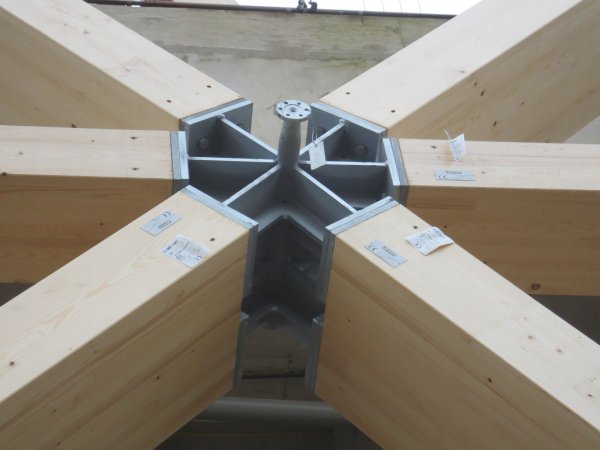 One consequence of using straight timber beams was the need to make irregular-shaped steel joints for the roof to curve. 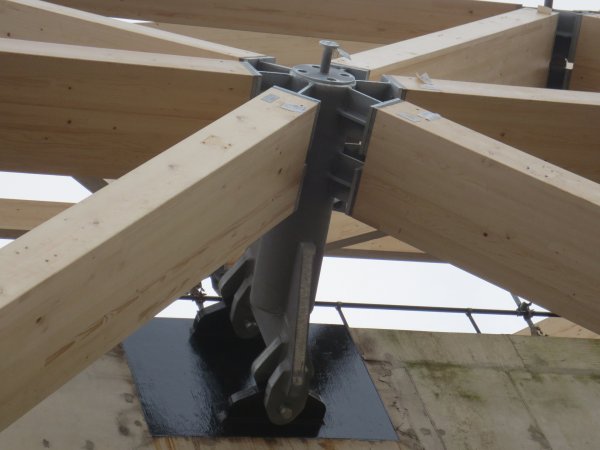 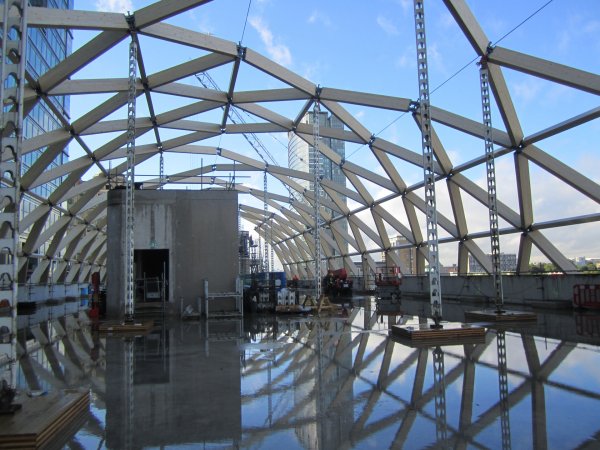 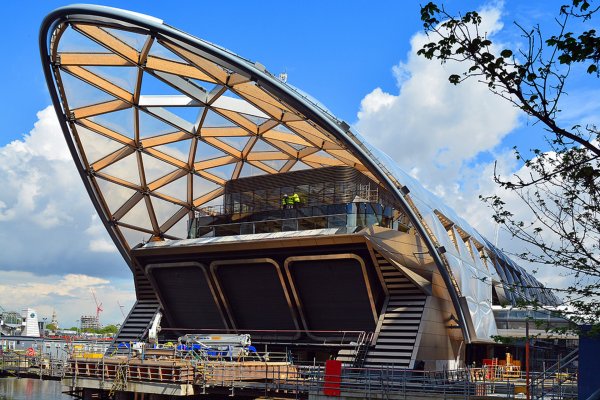 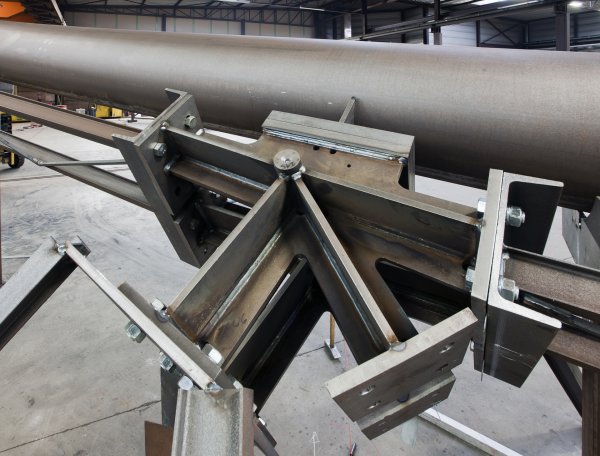 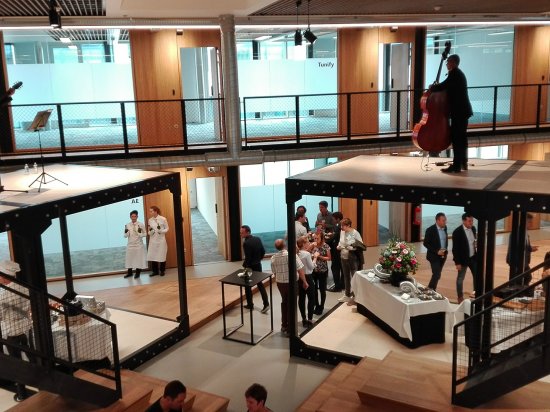 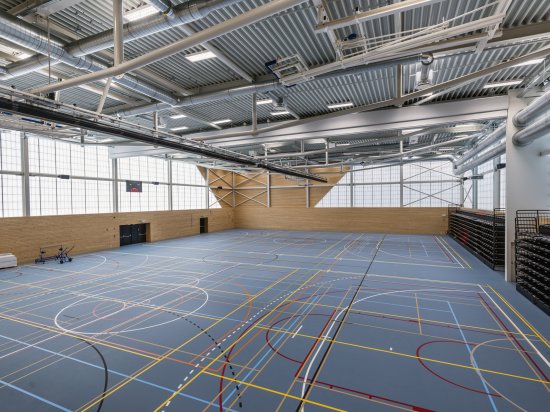